Get me outta here!

Last year I collected a great big round up of slightly spooky songs, and I’ve come across a few more fun ones that I wanted to share.

For all these songs, you can click the song titles to see my sources. I altered the first song a little (green ghosts didn’t match my felts, and kids seem more rambunctious than delicious). Scroll down to the bottom for more about the felts. 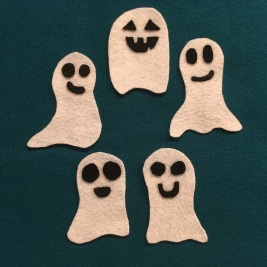 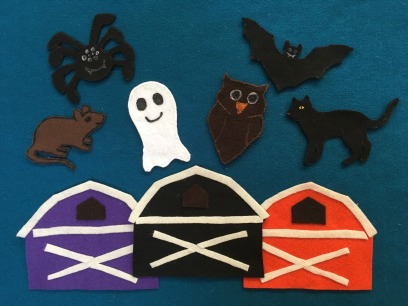 
Felt Story Extensions
The ghost felts are borrowed from my Ten Little Ghosts set, while Old MacDonald is an extension of the Old MacDonald guessing game. Owl, bat, and mouse templates are from Pattern Universe. I’d like to make a set of haunted houses as well, but for now we’ll sing it as “haunted barn.”

You can also use the barn/animal set with the rhyme, “Little ghost playing hide and seek… Are you in the orange barn? Let’s take a peek.”

For more Halloween felt ideas, check out this week’s Flannel Friday round-up over at Thrive After Three.